The interior decoraion of the Church of the Immaculate Conception 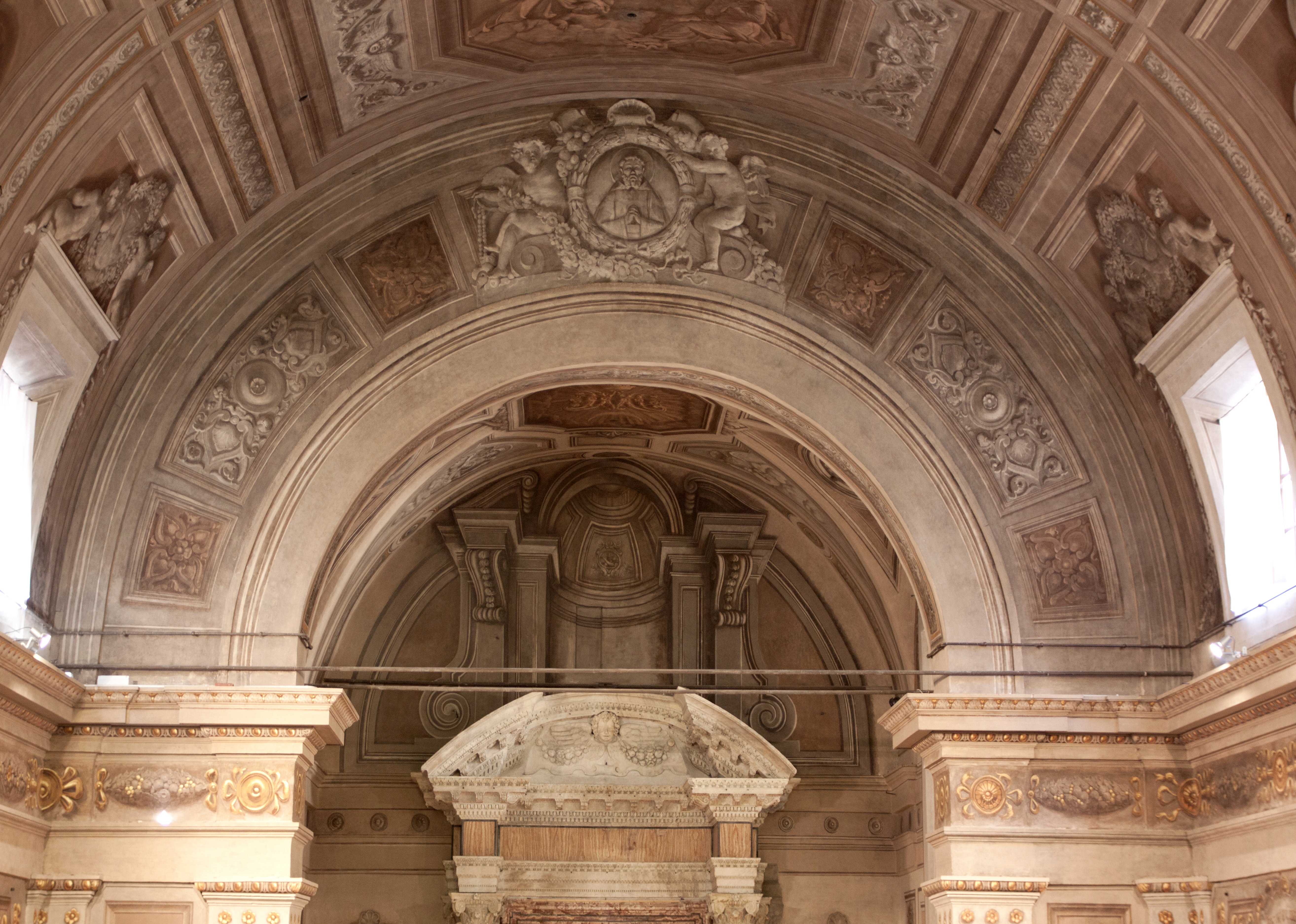 The Church of the Cappucini was built between 1626 and 1631 at the behest of Pope Urban VIII. The treatment involved the entirety of the decorated surfaces and artworks in the church. Work starting in the nave before moving to the side chapels so as to leave the area of the choir available for religious services. The works treated included the following:

Paintings and wall decorations: the fresco-and-lime-wash Assumption of the Virgin by Liborio Coccetti (1796) in the center of the vault; the eighteenth-century painted architecture of the nave and presbytery were completely repainted in tempera in a major restoration in 1882. In 1925 Alessandro Antonelli decorated the west wall after a large 17th century canvas located there, depicting Giotto’s famous mosaic The Navicella of St Peter, was removed. In 1926, for the seventh centenary of San Francesco, Giuseppe Carinci decorated the side chapels, while the Church Fund provided for the rennovation of the central nave from the cornice down. More recently, in 1948 and 1970, there were several restorations, including repainting entire chapels with modern household paints and stencil decorations. 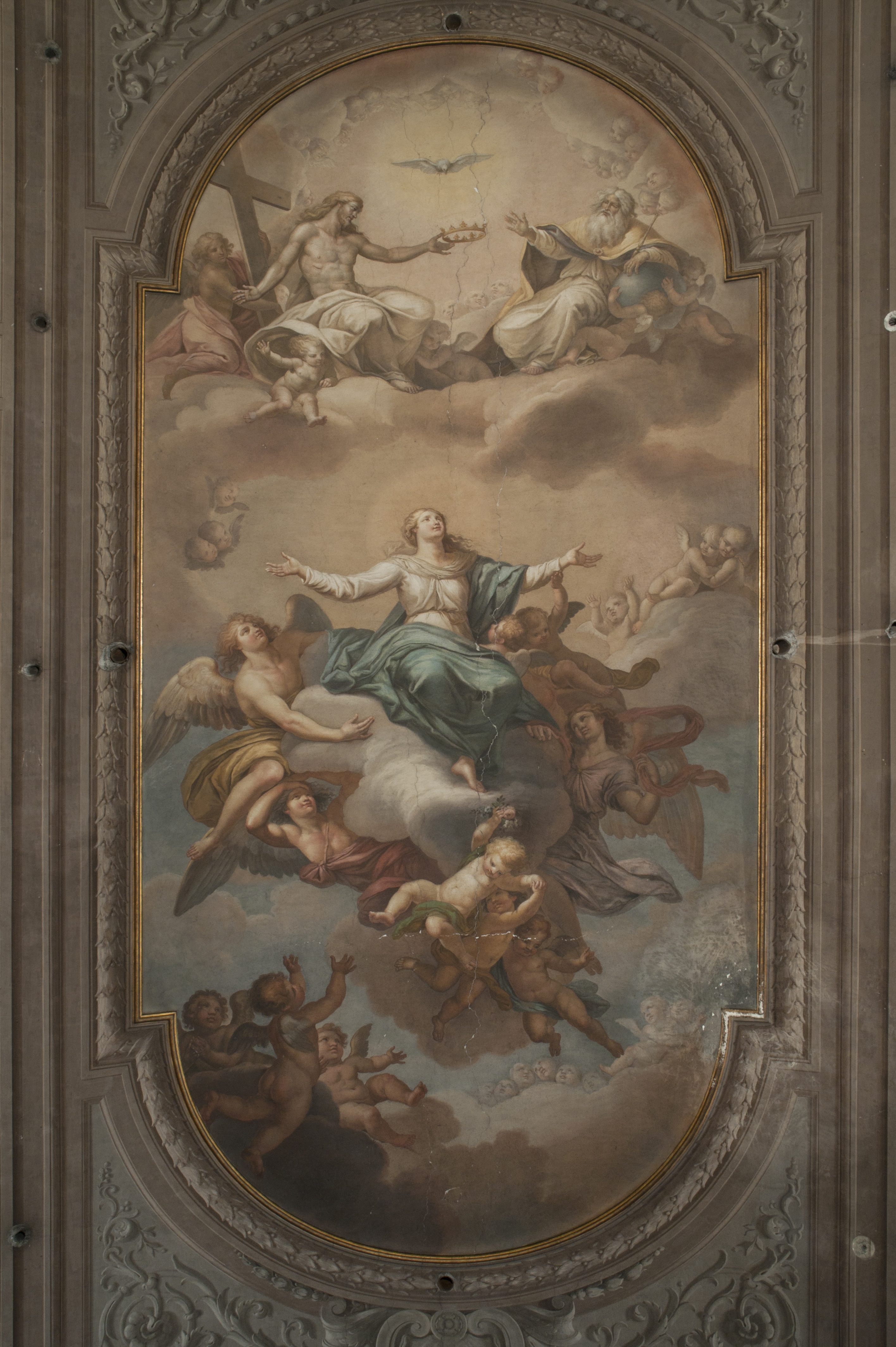 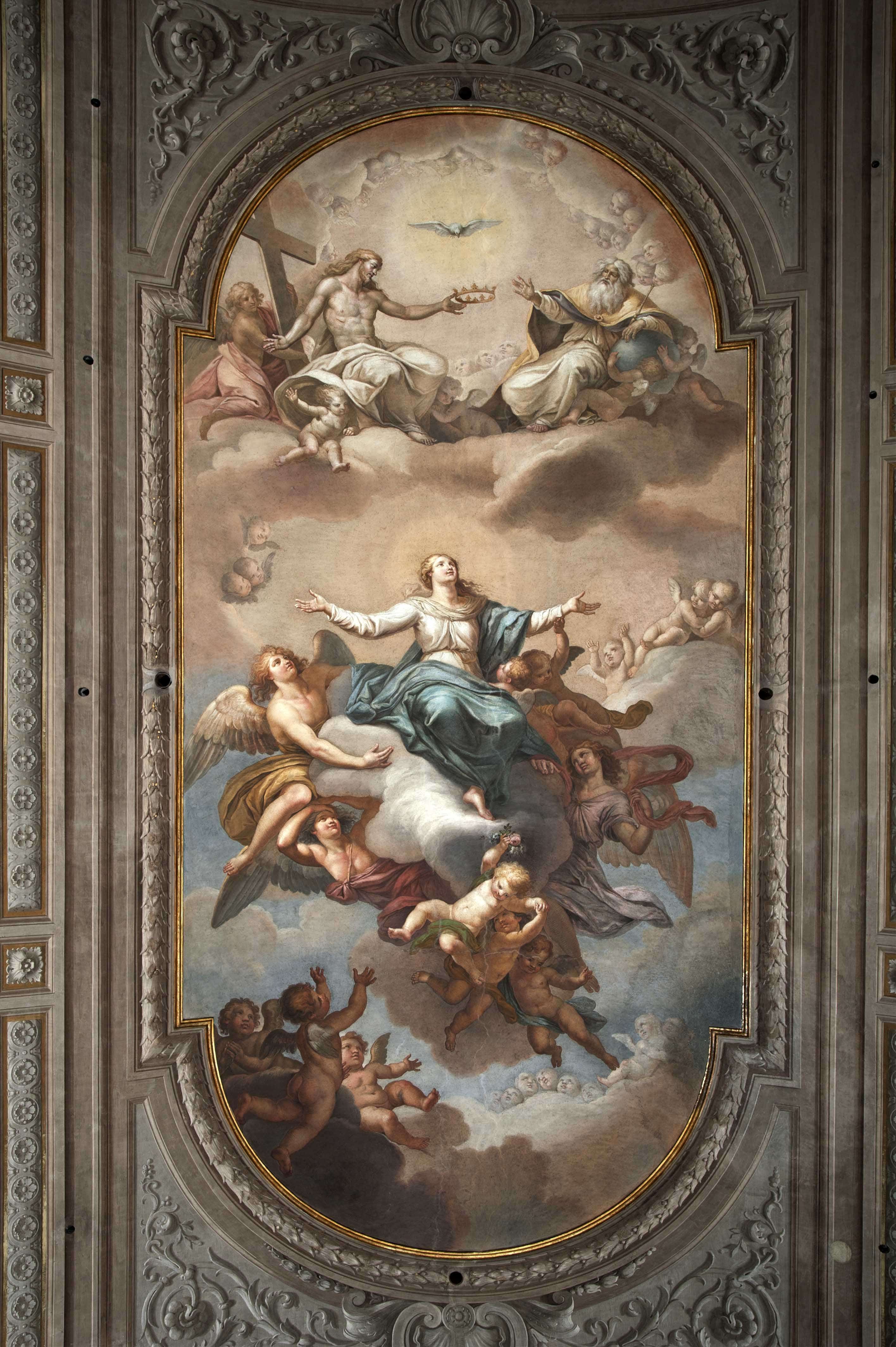 Vault of the central nave, before restoration

Vault of the central nave, after restoration

Metal works: lamps of the side chapels and reliquaries and votive offerings 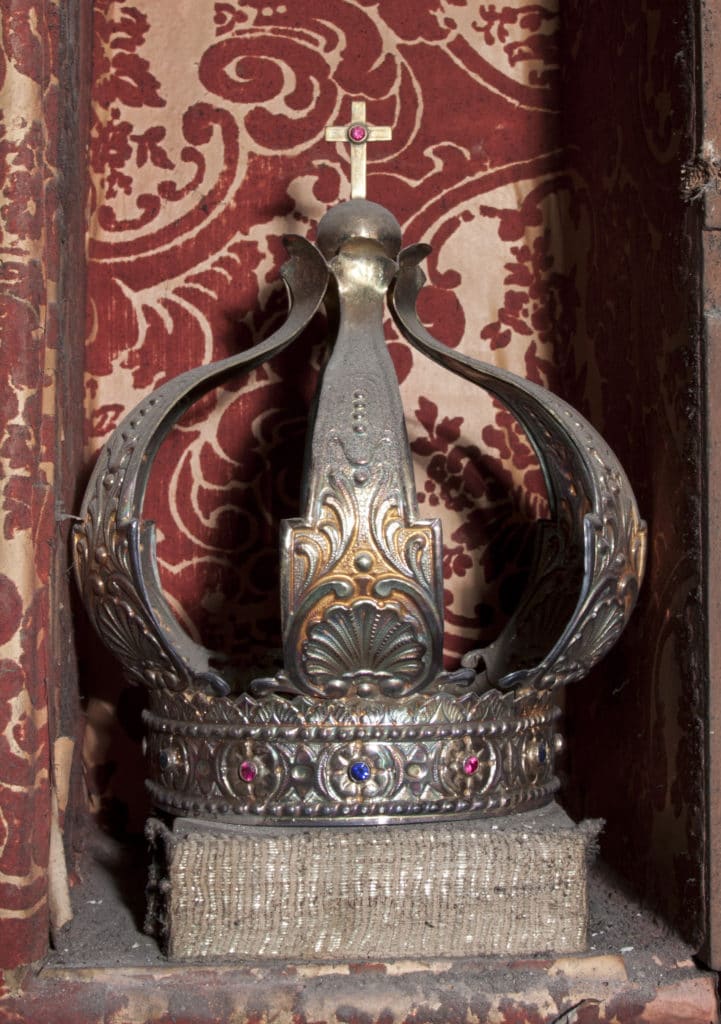 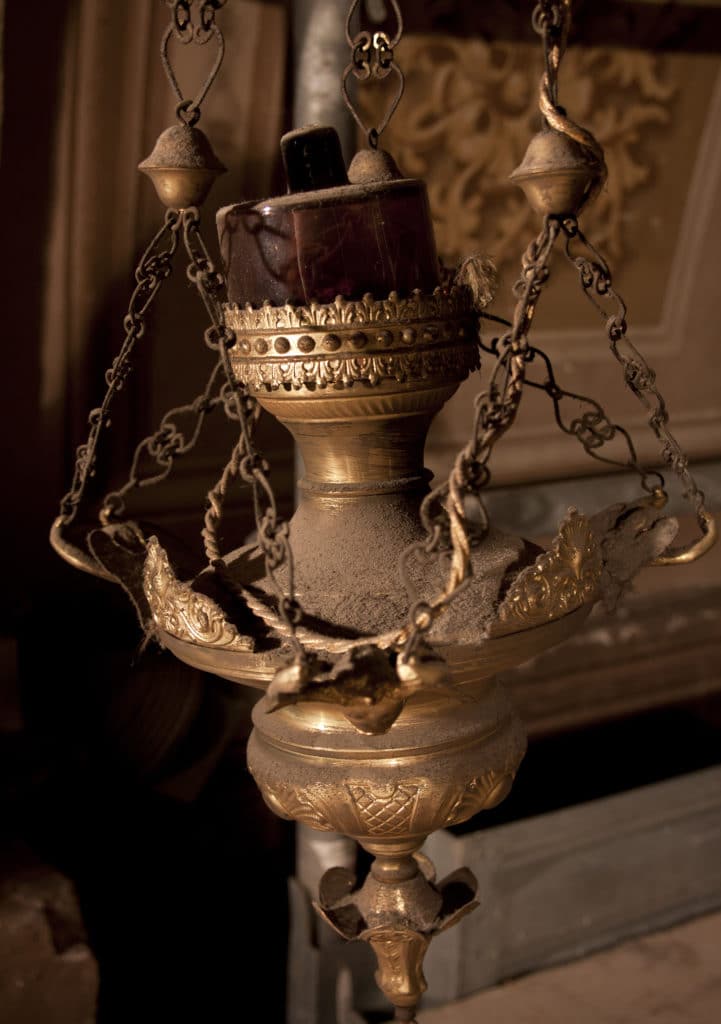 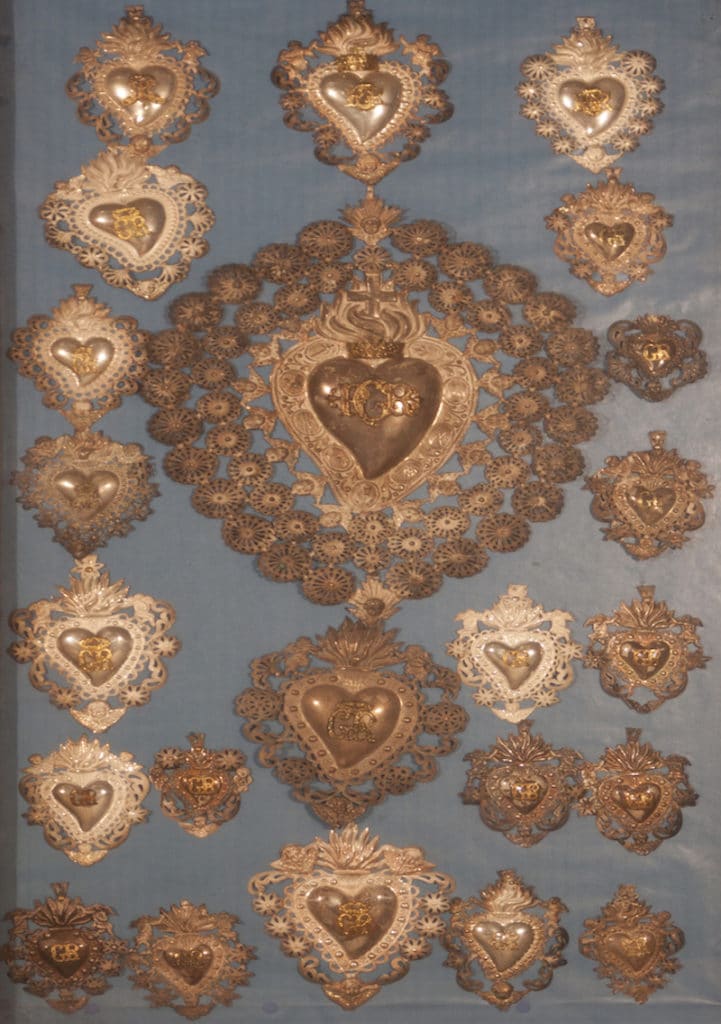 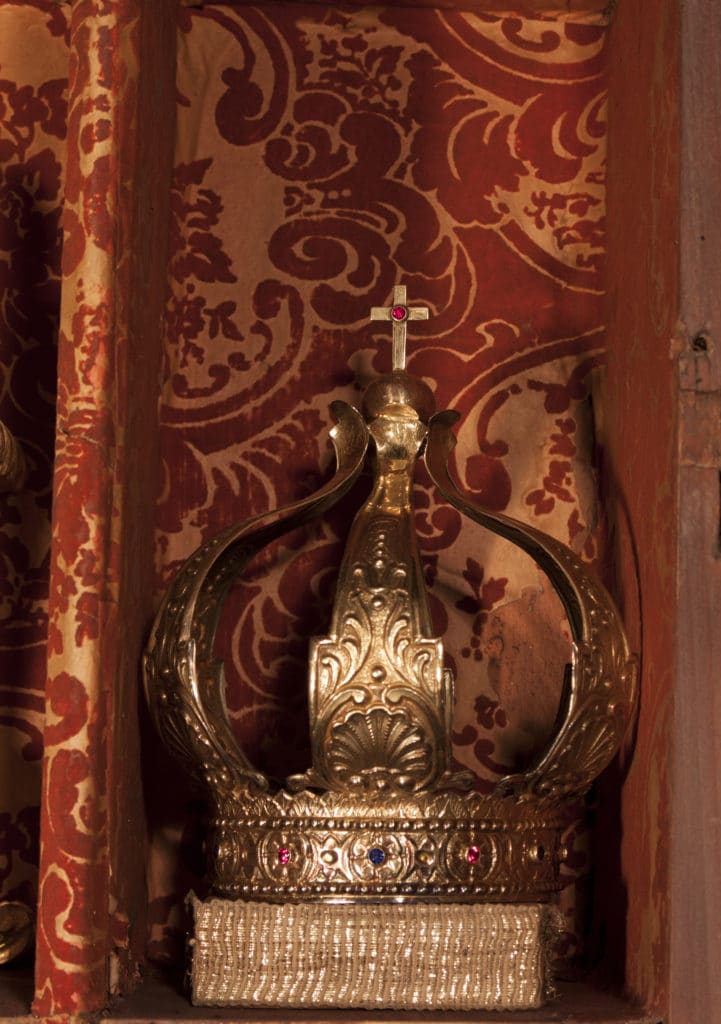 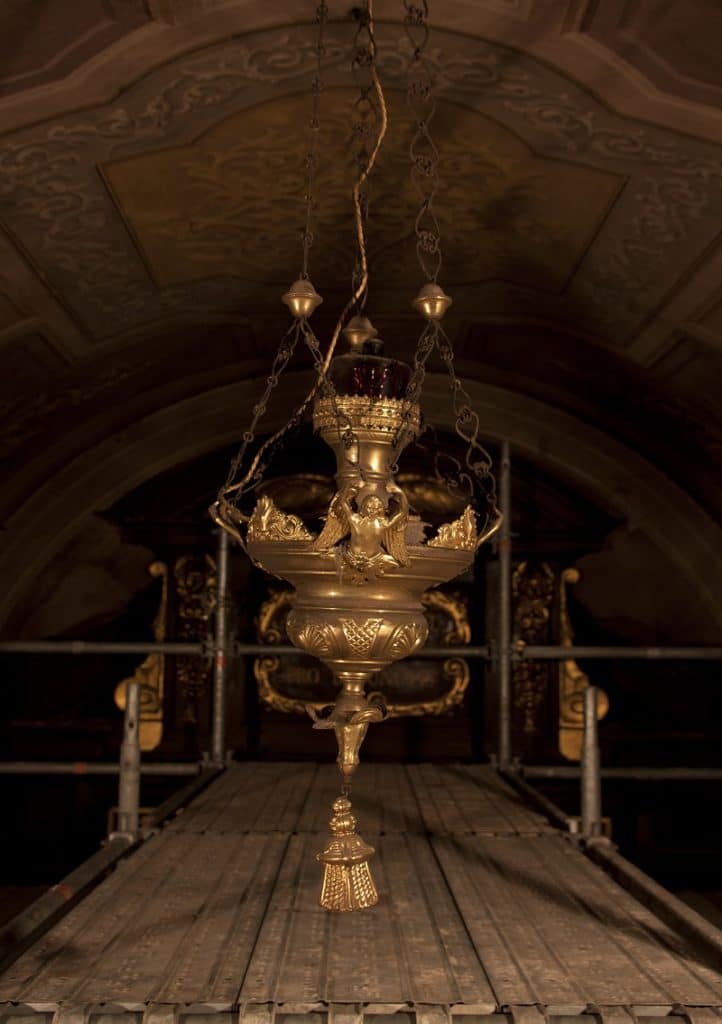 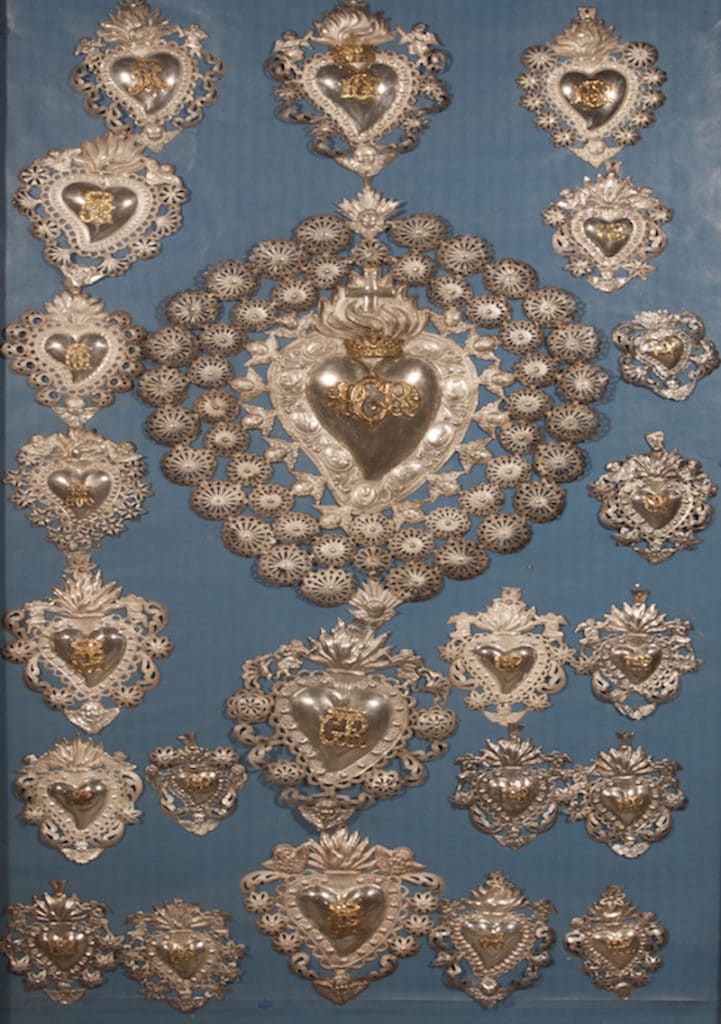 Marble monuments and sculpture: The main altar was partly constructed with marble from the workshop of St Peter’s and dates to 1628, as is the ciborium, richly decorated in polychrome marbl. Lining the walls are inscriptions and monuments from many different periods, some employing with marble reused from early monuments, like the fronts of Roman sarcophagi. In 1928-29 the lower parts of the side chapel altars were repaired using polychrome marbles, as were the marble courses along the base of the walls in the presbytery and the chapels in 1948.The floor has decorated slabs from various periods for tombs, now with modern bardiglio marble borders. 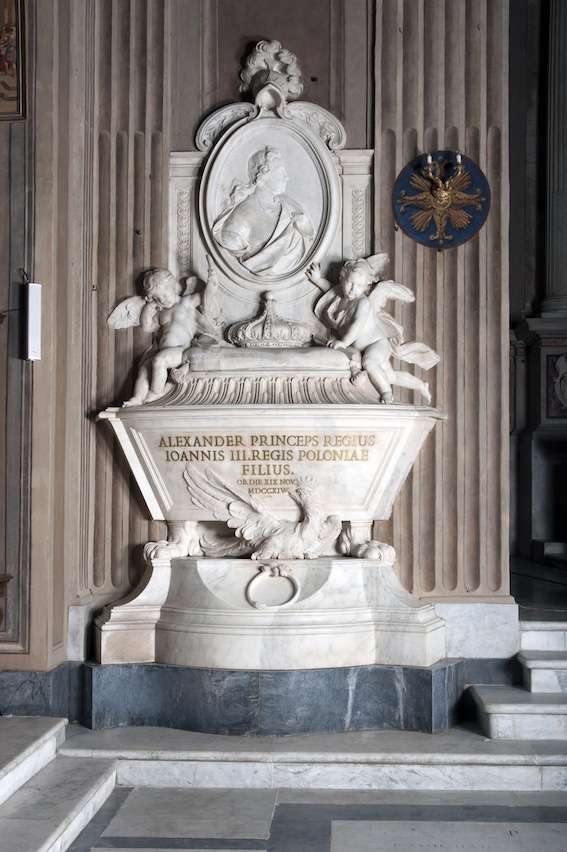 Tomb of the Prince of Poland John III, after restoration 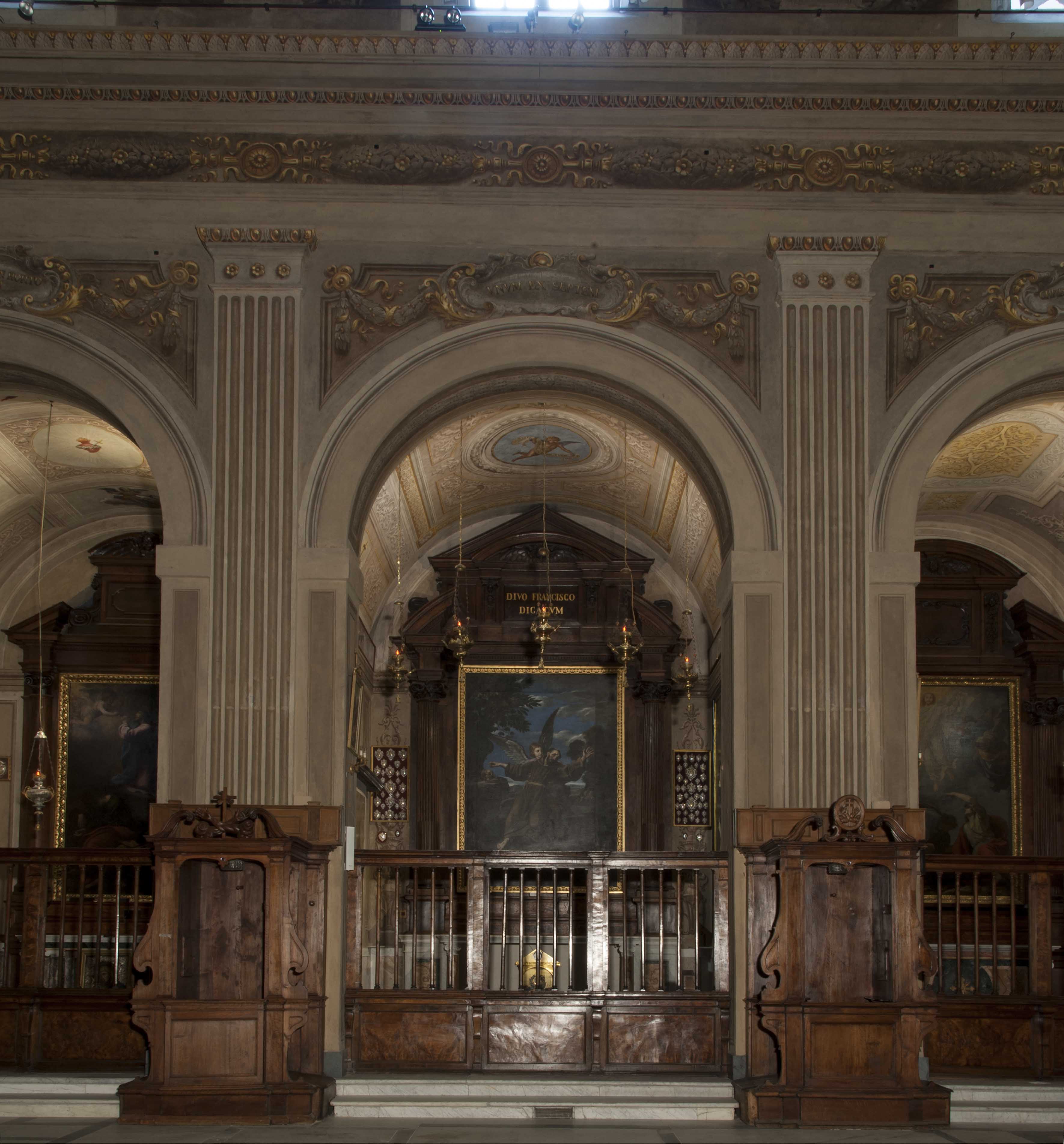 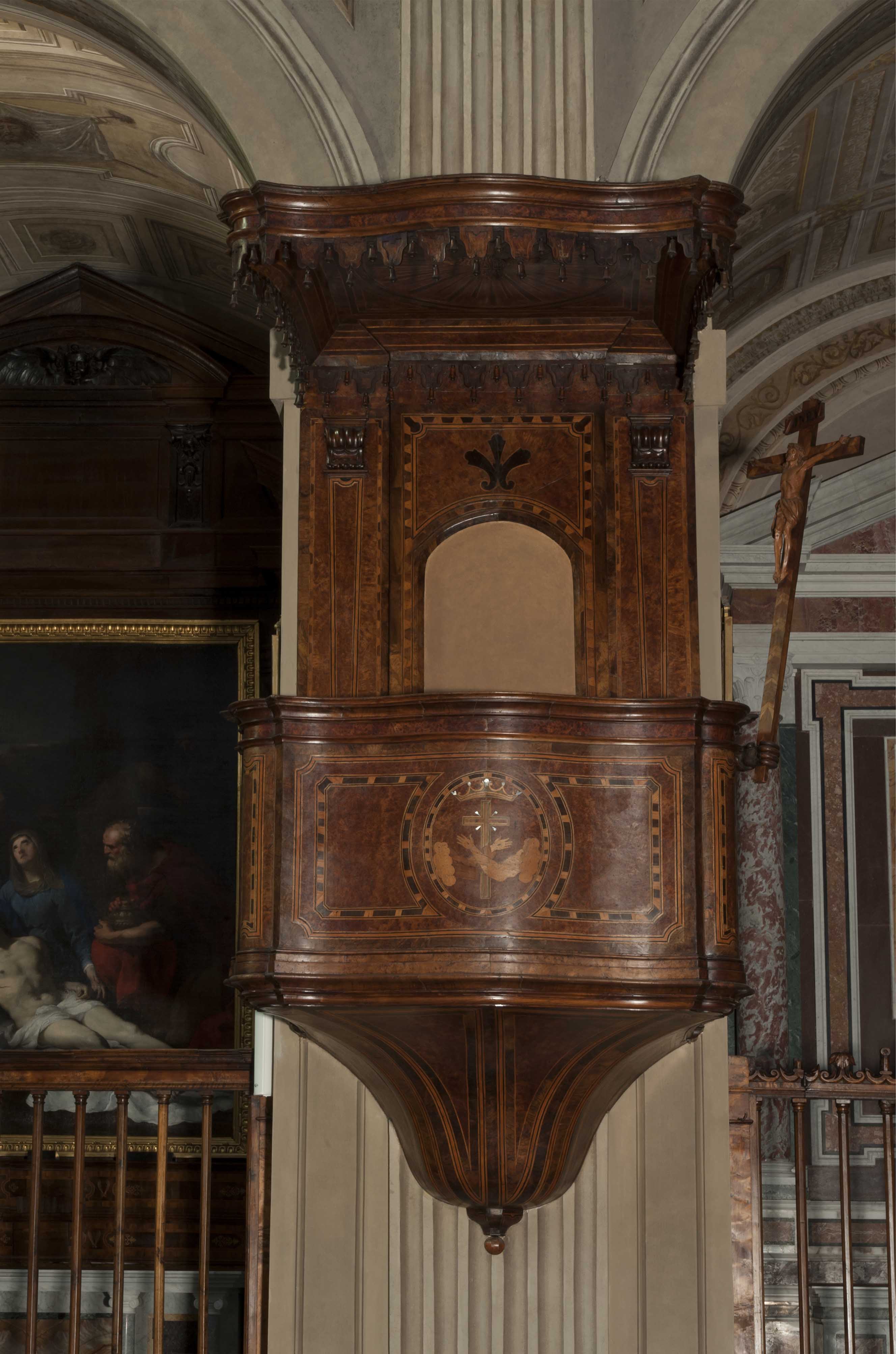 Works in wood: The carved and inlaid wood altars of the chapels and the pulpit are from the seventeenth-century, as are the fine screens for the chapels while the paintings frames and confessional have various dates. Two polychrome wood crucifixes from the sixteenth and eighteenth centuries were also restored.

Paintings on canvas: All the seventeenth-century altar pieces from the side altars (Domenichino, Lanfranco, Sacchi, Conca, etc.) were treated, as were the paintings added during the eighteenth century and the large canvas on the high altar, a nineteenth century copy of a painting by Lanfranco, destroyed in a fire in 1813. 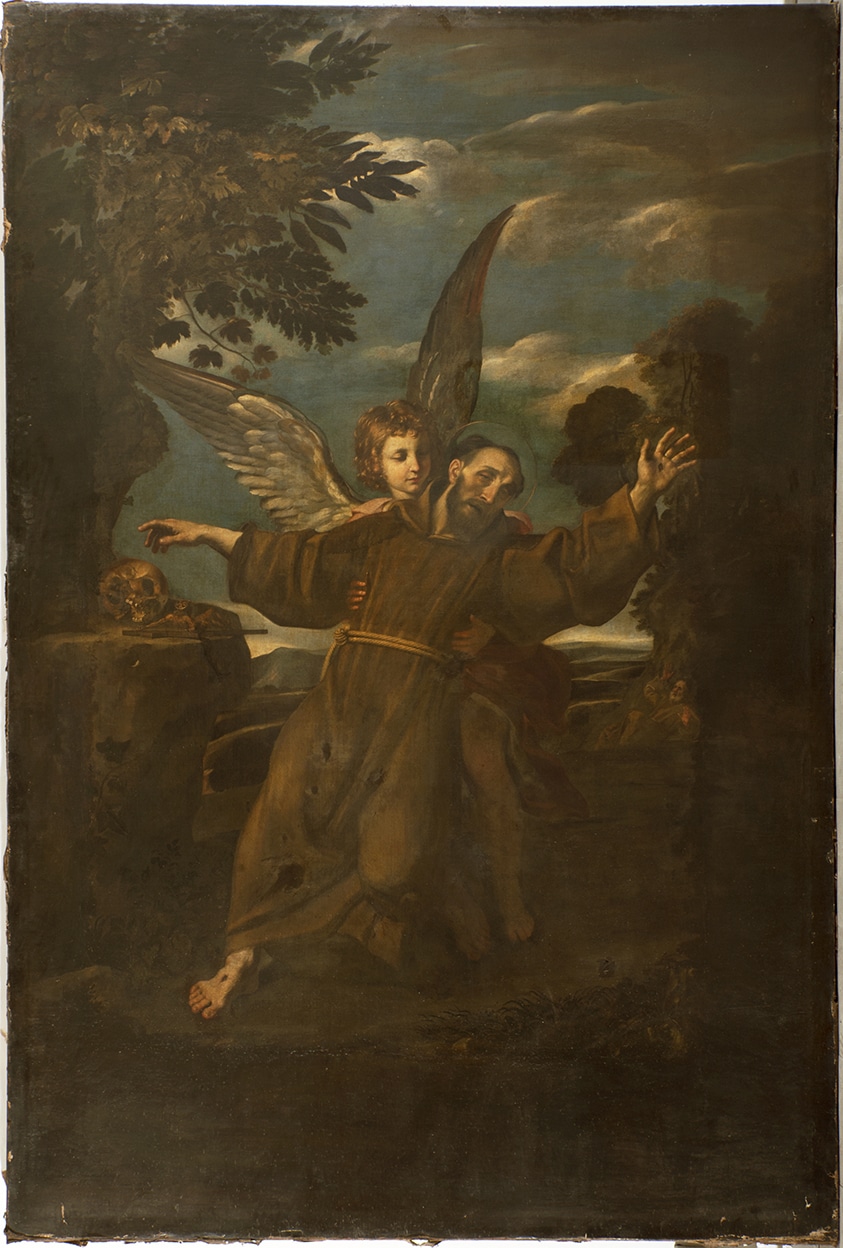 Domenichino, The ecstasy of St. Francis, before restoration

Domenichino, The ecstasy of St. Francis, after restoration

The challenge of this intervention, and what at the same time made it so interesting, was having to devise a unified treatment of the entire decorative apparatus of a building which had undergone constant tinkering, renovation and additions through the centuries. To this we can add the practice of decorating the church on feast days with curtains and oil lamps which continued up to 1950. This caused several accidents that left burn scars on the wooden altars and some canvases, and damage which left plasters and stuccos are covered in scratches, holes and thousands of nails. The wall decorations and painted architecture were constantly being touched up or repainted, initially with high quality tempera paint but as time passed, with poorer and poorer quality colours and even highly unsuitable modern enamel paints. The final result was decidedly disordered and difficult to understand, giving the architecture of the church a messy appearance. Our treatment obviously conserved the nineteenth-century renovation of the vault of the nave, while from the cornice downwards the twentieth-century redecoration of the pilasters and other architectural elements – which were much more heavily repainted compared to the vault – was lightened, in order to provide a unitary decorative scheme for the entire nave.

In the presbytery, the nineteenth-century painted architecture was obscured by twentieth-century repainting where the light tones had irremediably darkened, providing the effect of a negative image of the painted architecture and a loss of its sense of three-dimensional volumes. The removal of the altered glue-based temperas applied over the earlier glue based temperas proved to be extremely complex and the solution involved much more extensive retouching than is normal. In the side chapels, the 1926 decoration was preserved, and only more recent and disfiguring retouching were removed. The superb wooden altars had been repeatedly over-restored with added gilding applied to their carvings: these have been cleaned back to their more sober original seventeenth-century two toned decoration, with darker varnishes on the capitals and in the decorative carvings. Overall, cleaning and careful retouching was carried out to clarify once again the earlier architectural forms, while the careful restoration of furniture and paintings provided new dignity to the church. This treatment was also a splendid proving ground to show that our two associated companies were able to reach common ground on the methodological choices and achieve a harmonious result. 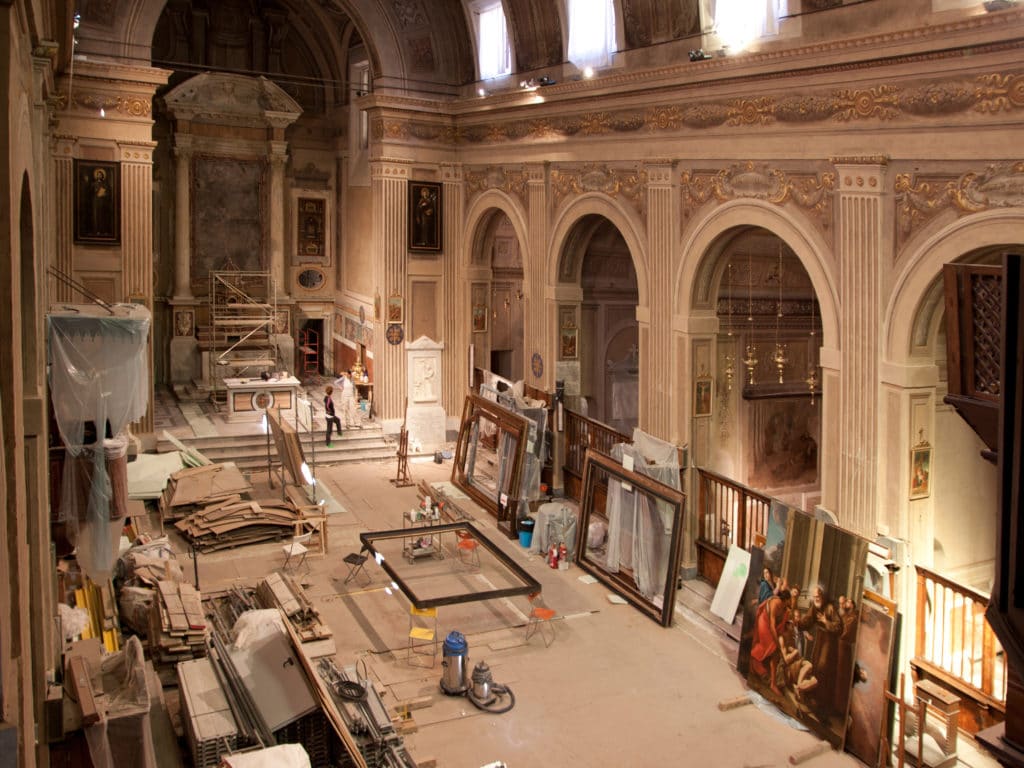 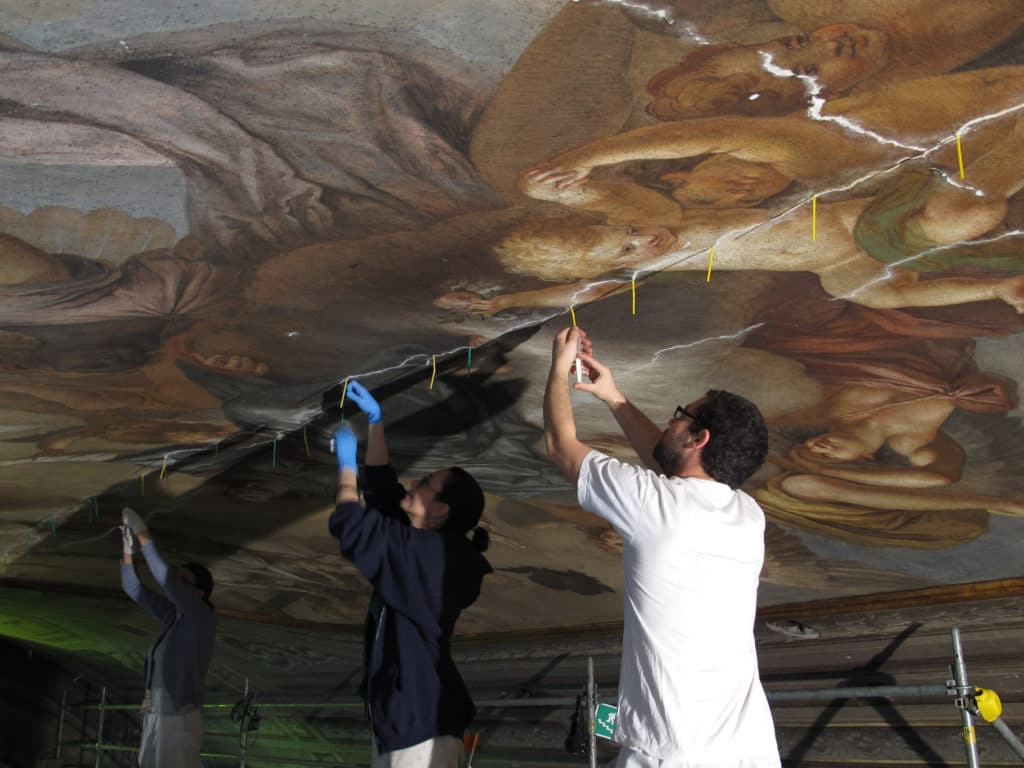 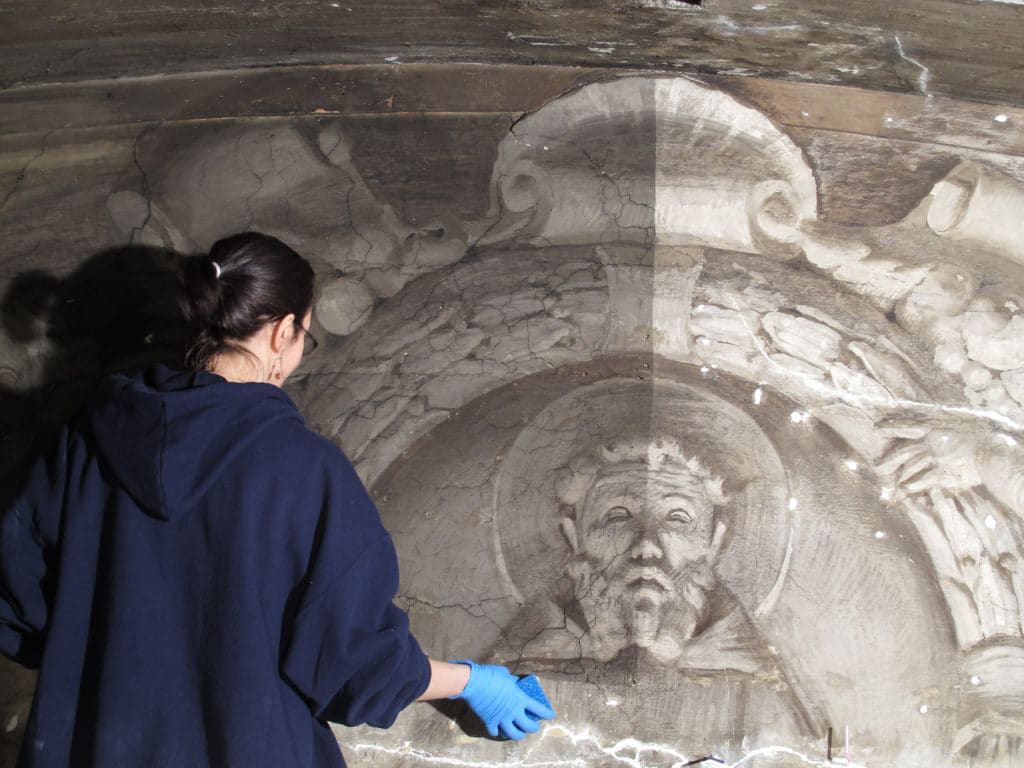 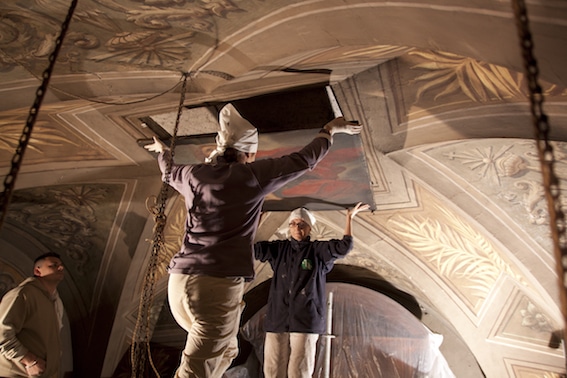 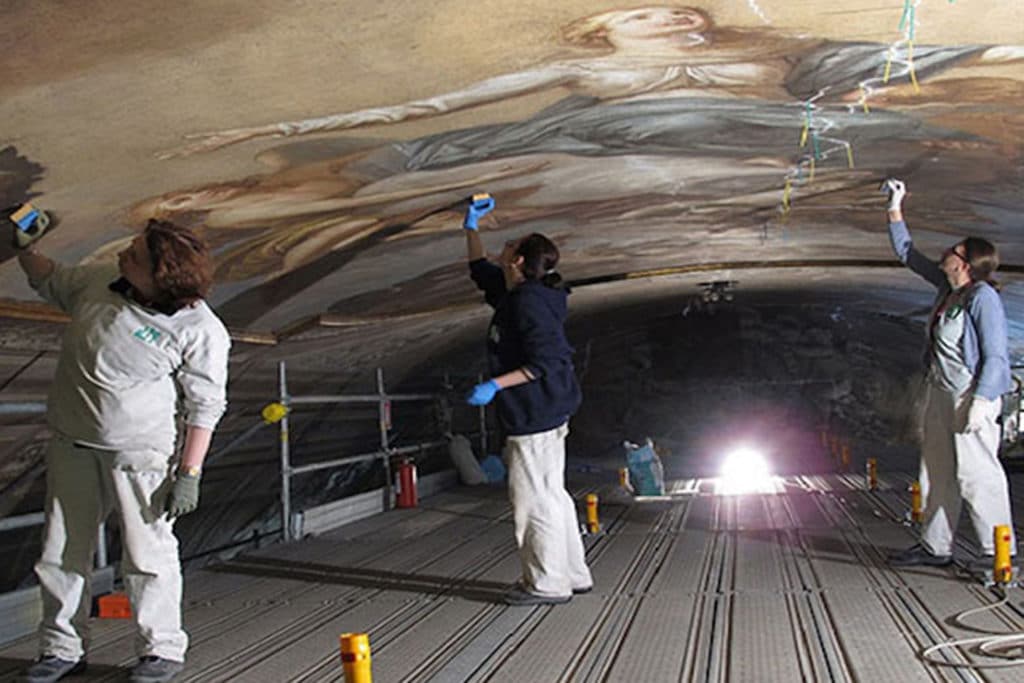 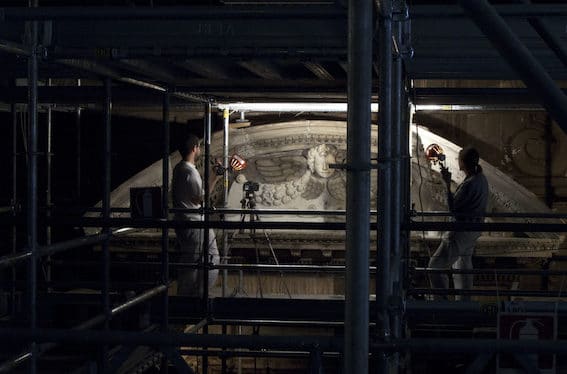 Alessandra Di Tommaso; Daniele Taggiasco for the graphic base map of the marble floor